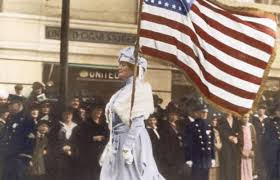 Minutes after Tennessee ratified the 19th Amendment, essentially ending American women’s decades-long quest for the right to vote, a young man with a red rose pinned to his lapel fled to the attic of the state capitol and camped out there until the maddening crowds downstairs dispersed. Some say he crept onto a third-floor ledge to escape an angry mob of anti-suffragist lawmakers threatening to rough him up.

Held
Showing Up for Each Other's Mental Health