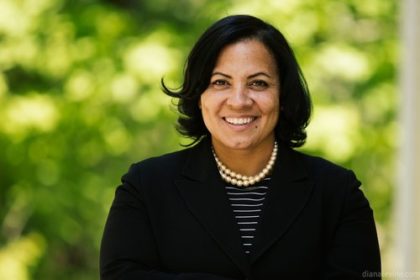 First Parish Dorchester, the oldest congregation in what is now the City of Boston, will honor Suffolk County District Attorney Rachael Rollins with a Meetinghouse Award for Service to the Community. The award will be presented to Ms. Rollins by Ardis Vaughan, Chair of the Board of Trustees and Reverend Terry Sweetser, Interim Senior Minister at the congregation’s annual Gala fundraiser on Saturday, November 2 at 7:00 PM.

The Meetinghouse Award, established by the congregation in 2007, recognizes that in her first year in office as District Attorney, Rollins has powerfully served the community by boldly raising the urgent need for reforms in our criminal justice system that is marked by the disproportionate criminalization of blacks and Latinos. First Parish applauds and encourages Rollins’ advocacy, commitment to positive change, and willingness to speak truth to power.

Rollins is the first cis female district attorney for Suffolk County, the first woman of color to become a DA in Massachusetts and part of a small but growing league of progressive DAs elected across the country.

Rollins’ approach to the role of District Attorney resonates strongly with First Parish where at each Sunday morning worship, the congregation affirms its faith commitment to love, service and truth. On January 27, 2019, First Parish installed a new Black Lives Matter banner on the Meetinghouse, and at the dedication ceremony, the congregation committed “to grow in becoming an intentionally and pro-actively anti-racist faith community.”

The Gala, to be held in the parish hall at 10 Parish Street from 7-10pm on November 2, is the annual fundraiser to support the mission of the congregation and the ongoing restoration of the landmark 1897 Meetinghouse that is used by a variety of community groups throughout the year. Full event details, including links to ticketing and sponsorship opportunities, can be found at firstparishdorchester.org/tickets

A Chosen Faith
An Introduction to Unitarian Universalism