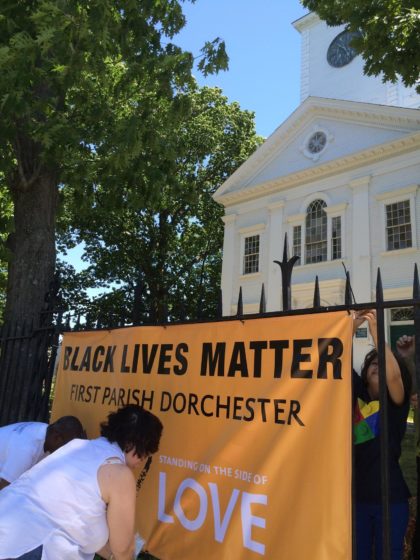 The Board of Trustees of First Parish Dorchester, a nearly 400-year old historic Unitarian Universalist congregation released the following statement:

First Parish Dorchester wholeheartedly declares that Black Lives Matter! We stand on the Side of Love and we affirm the worth and dignity of all people. We support all efforts to build community, social equity and justice in our neighborhood and in the world at large.

We support the Black Lives Matter Rally Dorchester, to be held on Town Field, Dorchester at 2:00-5:00 PM, on Friday June 19, 2020. In African American communities across the United States, June 19th is celebrated as “Juneteenth” commemorating the date in 1865 when official word reached Texas, the last state to receive word, that the Civil War had ended and that the enslaved Blacks had been freed over two years earlier by Emancipation Proclamation.

As a diverse, urban congregation, First Parish Dorchester fully supports the statement made by organizers of the June 19 event, “We advocate for liberation from mass incarceration, over policing, and state-sanctioned violence. Racism is wrong. Police brutality is wrong. Put an end to qualified immunity.”

First Parish Dorchester also endorses the call of the Unitarian Universalist Association (UUA) for member “congregations and other places of worship to develop alternatives to calling the police as one way to stop contributing to the anti-Black system of policing.”

The June 2, 2020 UUA statement reads in part: “As we mourn the death of George Floyd and other Black people killed by police, and as we respond to COVID-19, which continues to disproportionately impact Black communities, the UUA denounces anti-Black racism and the inherent violence of policing. Police brutality is a symptom of white supremacy and anti-Black racism, and as people of faith and conscience dedicated to justice and liberation, we must name this truth.”

In addition to examining “alternatives to policing,” the UUA statement urges congregations to join others in working “to combat the violence of militarism and the police state” and “to support the uprising” and “the frontline organizers providing leadership.”

Ardis Vaughan, chair of the First Parish Board of Trustees, longtime member and Dorchester resident stated: “What we are experiencing in Boston and in the nation is racial trauma and stress in its most raw form. These racially traumatic events have personally affected families, friends, neighbors and members of our own congregation. First Parish Dorchester stands with our Dorchester neighbors and we will look at ways to support one another and our community. We at First Parish Dorchester believe[1] [2]  that all Black Lives Matter and that confronting and ending anti-Blackness will liberate us all.”

First Parish’s statements and actions on racial justice in the past few years include:

On January 27, 2019, the congregation installed a new banner on the front of the Meetinghouse and issued this public commitment:

“We seek to grow in becoming an intentionally and pro-actively anti-racist faith community through reflection and action, listening and learning, especially listening to and learning from the people of color in our congregation and neighborhood. We commit to raising anti-racist children, and to encouraging one another in the on-going, sometimes painful work of seeing the racism that lives within us, and dismantling all systems of oppression that exist in our world.”

Since 2016, the congregation, in its worship services, Sunday school, and informal conversations and actions, reflected on the Black Lives Matter movement and how the predominantly white congregation could support the movement. The First Parish social justice committee has worked to raise awareness within the congregation of white supremacy culture, the legacy of American slavery since 1619, and the pressing need for criminal justice reform.

On November 2, 2019, the First Parish honored Suffolk County District Attorney Rachael Rollins with a Meetinghouse Award for Service to the Community for boldly raising the urgent need for reforms in our criminal justice system that is marked by the disproportionate criminalization of Blacks and Latinos.

On Sunday June 7, 2019, First Parish held “Listen to Black Lives” a special on-line Sunday service that featured testimony by Black members of the congregation, and poetry, music and video created by Black artists. After the service, the members of the congregation met again on-line to discuss what they heard and learned; to share their personal experience of the events and protests since the killing of George Floyd; and to offer ideas on what actions First Parish can take next. Chief among these actions will be to address First Parish’s own history of white privilege and to work towards making First Parish even more welcoming and inclusive to current BIPOC (Black, Indigenous and People of Color) members and visitors. The congregation’s social justice committee plans to host additional on-line discussion forums for members and friends through the summer.

The congregation’s roots run deeply throughout Dorchester history; the Puritans built the first church shortly after their 1630 landing. A church of this congregation has stood on Meetinghouse Hill since 1670. First Parish Dorchester is the oldest congregation within the present-day boundaries of the City of Boston, and since its founding, the congregation has been committed to a strong social mission.

The congregation held the first recorded town meeting in Dorchester in 1633, and was one of five churches that founded Harvard College. The original Puritan congregation is still remembered for establishing the country’s first tax-supported, free public elementary school (The Mather School) in 1639. The first four meetinghouses acted as Dorchester’s town hall. The fifth building, built in 1816, was the host to many social justice leaders, such as William Lloyd Garrison and Theodore Parker. In the 1880s, FPD members and friends organized the Fields Corner Industrial School for local children, which has evolved into DotHouse Health, a multi-service health center where congregants have served on the board of directors.

Universalists and Unitarians in America
A People's History