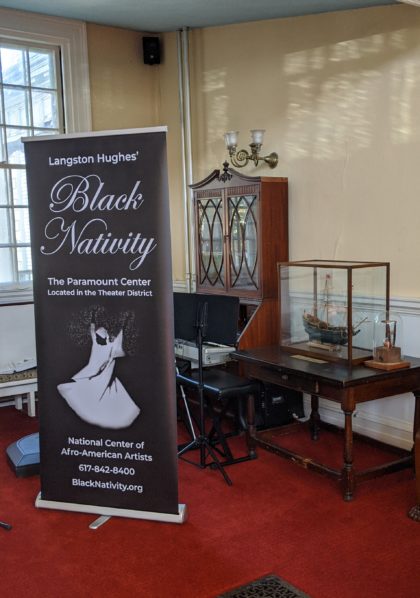 Boston’s Black Nativity looked forward to celebrating it’s 50th annual production this year –  the longest run anywhere of the play written by Langston Hughes.  While it is not be possible to mount a live show, the anniversary will be celebrated at a “virtual” Gala and in a film created by Emerson College documenting its rich history. Information about the Gala and viewing the film will be shared as soon as it is available.

Last week, performers and key figures in the Black Nativity community were interviewed in our sanctuary for the project.  Following stringet COVID 19 protocals, Karen McKeen, Creative Producer of Emerson Productions and a small crew including students, filmed the interviews.  For all involved it was the first time they were at First Parish Dorchester.

Thanks to “J.T.” Tulloch, a Black Nativity mainstay who operates the Family Affair restaurant in Upham’s Corner for reffering them to First Parish. “J.T.” performed at First Parish in September in recording of the “Concert for the Soul” produced by the Dorchester Music Festival that will be released in the new year.